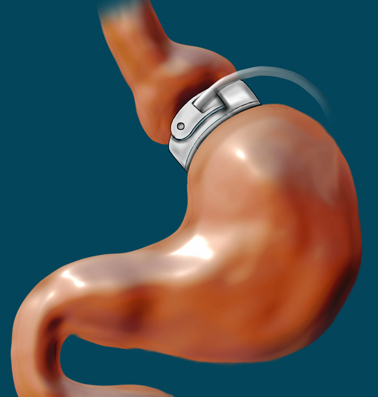 Gastric banding is the least invasive bariatric surgery of its kind. It is performed using laparoscopic surgery and usually results in a shorter hospital stay, faster recovery, smaller scars, and less pain than open surgical procedures. Because no part of the stomach is stapled or removed, and the patient's intestines are not re-routed, he or she can continue to absorb nutrients from food normally. Gastric bands are made entirely of biocompatible materials, so they are able to stay in the patient's body without causing harm.
However, not all patients are suitable for laparoscopy. Patients who are extremely obese, who have had previous abdominal surgery, or have complicating medical problems may require the open approach.

Laparoscopic surgery A small incision (less than 1/2 inch) is made near the belly button. Carbon dioxide (a gas that occurs naturally in the body) is introduced into the abdomen to create a work space for the surgeon. Then a small laparoscopic camera is placed through the incision into the abdomen.
The camera sends a picture of the stomach and abdominal cavity to a video monitor. It gives the surgeon a good view of the key structures in the abdominal cavity. A few additional, small incisions are made in the abdomen. The surgeon watches the video monitor and works through these small incisions using instruments with long handles to complete the procedure. The surgeon creates a small, circular tunnel behind the stomach, inserts the gastric band through the tunnel, and locks the band around the stomach.
Clinical studies of laparoscopic (minimally invasive) bariatric surgery patients found that they felt better, spent more time doing recreational and physical activities, benefited from enhanced productivity and economic opportunities, and had more self-confidence than they did prior to surgery.

Mechanics The placement of the band creates a small pouch, or stoma, at the top of the stomach. This pouch holds approximately - cup of food. (The typical stomach holds about 6 cups of food.) The pouch fills with food quickly, and the band slows the passage of food from the pouch to the lower part of the stomach. As the upper part of the stomach registers as full, the message to the brain is that the entire stomach is full, and this sensation helps the person to be hungry less often, feel full more quickly and for a longer period of time, eat smaller portions, and lose weight over time.
As patients lose weight, their bands will need adjustments, or fills, to ensure comfort and effectiveness. The gastric band is adjusted by introducing a saline solution into a small access port placed just under the skin. A specialized non-coring needle is used to avoid damage to the port membrane and prevent leakage. There are many port designs (such as high profile and low profile), and they may be placed in varying positions based on the surgeon's preference, but are always attached (through sutures, staples, or another method) to the muscle wall in and around the diaphragm.
Adjustable gastric bands hold between 4 to 12 cc of saline solution, depending on their design. When the band is inflated with saline solution, it places pressure around the outside of the stomach. This decreases the size of the passage between the pouch created from the upper part of the stomach and the lower stomach and further restricts the movement of food. Over the course of several visits to the doctor, the band is filled until the optimal restriction has been achieved - neither so loose that hunger is not controlled, nor so tight that food cannot move through the digestive system. The number of adjustments required is an individual experience and cannot be accurately predicted.

Single Site Laparoscopy (SSL) Single Site Laparoscopy (SSL), or also referred to as Single Incision Laparoscopic Surgery (SILS), is an advanced, minimally invasive (keyhole) procedure in which the surgeon operates almost exclusively through a single entry point, typically the patient's umbulicus (navel). Special articulating instruments and access ports obviate the need to place trochars externally for triangulation, thus allowing the creation of a small, solitary portal of entry into the abdomen.
SILS has been used for several common surgical procedures including hernia repair, cholecystectomy and nephrectomy. The SILS technique has also been used in weight-loss surgery for both sleeve gastrectomy and 'more recently' for laparoscopic adjustable gastric banding (LAGB).

Surgical indications
In general, gastric banding is indicated for people for whom all of the following apply :
Body Mass Index above 32.5, or more over their estimated ideal weight, according to the National Institutes of Health, or those between 25 to 32.5 with co-morbidities that may improve with weight loss (type 2 diabetes, hypertension, high cholesterol, non-alcoholic fatty liver disease and obstructive sleep apnea.)
Age between 18 and 55 years (although there are doctors who will work outside these ages, some as young as 12).
Failure of medically supervised dietary therapy or weight-loss drug therapy for more than one year.
History of obesity (generally 5 years or more).
Comprehension of the risks and benefits of the procedure and willingness to comply with the substantial lifelong dietary restrictions required for long term success.

Gastric banding is usually not recommended for people with any of the following :
If the surgery or treatment represents an unreasonable risk to the patient.
Untreated endocrine diseases such as hypothyroidism.
Inflammatory diseases of the gastrointestinal tract such as ulcers, esophagitis or Crohn's disease.
Severe cardiopulmonary diseases or other conditions which may make them poor surgical candidates in general.
An allergic reaction to materials contained in the band or who have exhibited a pain intolerance to implanted devices
Dependency on alcohol or drugs.
People with severe learning or cognitive disabilities or emotionally unstable people.


Special considerations for pregnancy If considering pregnancy, ideally the patient should be in optimum nutritional condition prior to, or immediately following conception; deflation of the band may be required prior to a planned conception. Deflation should also be considered should the patient experience morning sickness. The band may remain deflated during pregnancy and once breast feeding is completed, or if bottle feeding, the band may be gradually re-inflated to aid postpartum weight loss as needed.

Comparison with other surgical techniques Gastric band placement, unlike malabsorptive weight loss surgery (e.g. Roux-en-Y gastric bypass surgery (RNY), biliopancreatic diversion (BPD) and Duodenal Switch (DS)), does not cut or remove any part of the digestive system. If indicated, it is usually easy to remove the band and reverse the surgery, requiring only a laparoscopic procedure, after which the stomach usually returns to its normal pre-banded state. Unlike those who have procedures such as RNY, DS, or BPD, it is unusual for gastric band patients to experience any nutritional deficiencies or malabsorption of micro-nutrients: Calcium supplements and Vitamin B12 injections are not generally required following gastric banding (as they are with RNY, for example). Gastric dumping syndrome issues also do not occur since no component parts of the intestines are removed or re-routed. The techniques of stomach stapling and sleeve gastrectomy (where approximately half of the stomach is either "sidelined" or removed) are making a comeback in some centres after having falling out of use during the last decade due to a high complication rate; their impact on food passage is comparable to gastric banding. Current proponents of this surgical approach claim weight loss and complication outcomes similar to gastric banding. Gastric banding is practically always performed as a laparoscopic technique (resulting in shorter hospital stay), whereas this is less often the case for RNY, BPD and DS.
With gastric banding, initial weight loss is slower than with RNY, generally 450 - 900 grams per week; however, statistics indicate that over a 5-year period, weight loss outcome is similar. Weight regain is possible with ANY weight loss procedures including the more radical procedures that initially result in rapid weight loss. The World Health Organization recommendation for weight loss is - to 1 kilogram per week and an average banded patient may lose this amount. Clearly this is variable based on the individual and their personal circumstances, motivation, and mobility. The restriction imposed by the band generally needs to be greater for the initial weight loss phase and less for the subsequent weight maintenance phase. However as the patient loses weight, the internal organs (including the stomach) also shrink, and band system fill may need to be increased slightly. It should be emphasised that bandsters require ready access to a clinic where fill adjustments can be made; most patients will have between 5 and 15 fill adjustments over the lifetime of their band.
A commonly reported occurrence for banded patients is regurgitation of swallowed food and/or saliva from the pouch, commonly known as Productive Burping (PBing). There is argument ongoing about whether productive burping is to be considered normal or not - many bandsters feel that restriction is unlikely to be sufficient for significant weight loss unless PBing is experienced at least occasionally. The patient should consider eating less, eating more slowly, or chewing their food more thoroughly. Occasionally, the narrow passage into the larger/lower part of the stomach may become blocked by a large portion of unchewed or unsuitable foodstuff.

Benefits of gastric banding compared to other bariatric surgeries
Lower mortality rate : only 1 in 2000 versus 1 in 250 for Roux-en-Y gastric bypass surgery.
Fully reversible : stomach returns to normal if the band is removed.
No cutting or stapling of the stomach.
Short hospital stay.
Quick recovery
Adjustable without additional surgery
No malabsorption issues (because no intestines are bypassed)
Fewer life threatening complications (see complications table for details)

Potential Complications
Gastritis (irritated stomach tissue) causing diffuse discomfort or pain; if severe this may result in actual ulcer formation
Erosion - The band may slowly migrate through the stomach wall to the inside. This may occur silently but usually causes symptoms similar to the above. Urgent medical/surgical treatment will be required if there is any internal leak of gastric contents, or bleeding.
Slippage - An unusual occurrence in which the lower part of the stomach may prolapse through the band causing an enlarged upper pouch. In severe instances this can cause an obstruction and require an urgent operation to fix.[citation needed]
Malposition of the band - This can cause a kink in the stomach, or (rarely) the band may not encircle the stomach at all, giving no restriction to the passage of food.
Problems with the port and/or the tube connecting port and band - The port can "flip over" so that the membrane can no longer be accessed with a needle from the outside (this often goes hand in hand with a tube kink, and may require repositioning as a minor surgical procedure under local anaesthesia); the port may get disconnected from the tube or the tube may be perforated in the course of a port access attempt (both would result in loss of fill fluid and restriction, and likewise require a minor operation).
Internal bleeding.
Infection.
The band lifetime combined incidence of all complications is of the order of 10%.
The psychological effects of any weight loss procedure also must not be ignored, as a proportion of patients fail to lose weight (often because they subconsciously develop strategies to defeat the band and maintain their status quo which they have become psychologically habituated to). Continued counseling, dietary advice and interaction with WLS support groups - locally and/or on the web - is widely seen as being of considerable help to patients, and can make the difference between success and failure. Many patients perceive themselves as having previously failed at every other weight loss strategy, and consequently their trigger threshold for giving up on WLS is often low, even after substantial financial commitment.